Why Assistive Technology Matters to Me: David Jordan 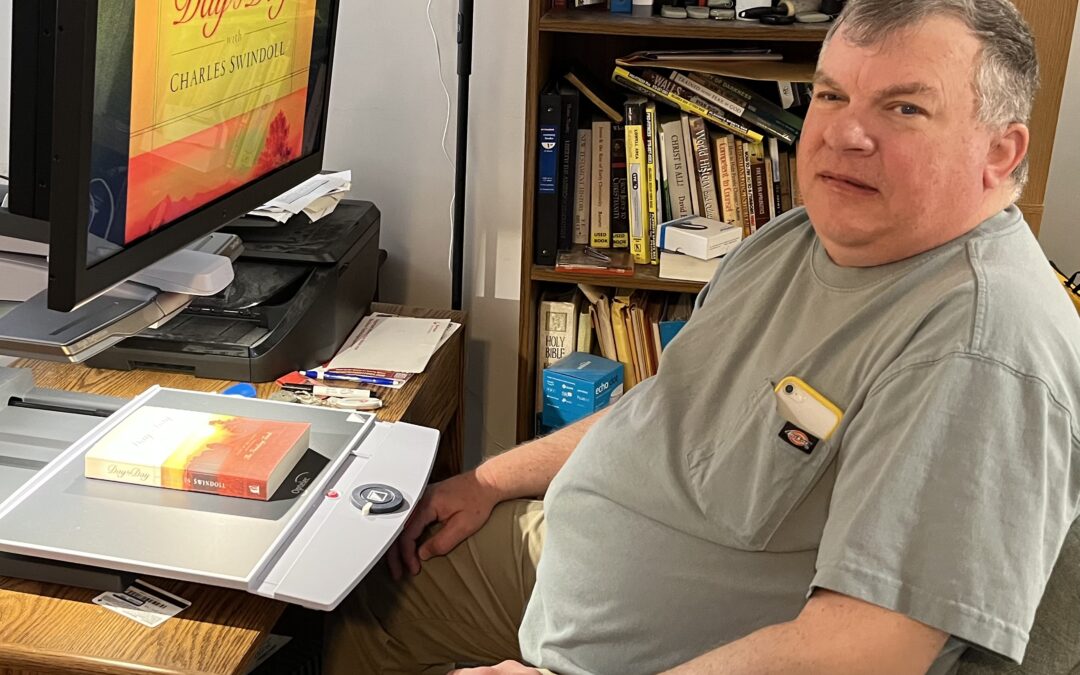 This month, we interviewed David Jordan for our blog series, “Why AT (Assistive Technology) Matters to Me.”  We’ve known David for over twenty years, and we’re so happy to have the opportunity to share his story with you.  David shows us how we can all use technology to reach our goals and to help others.

David’s story begins in 1970, when he was diagnosed with diabetes at the age of 8.  In later years, his college plans were interrupted when he experienced total kidney failure, and eventually underwent a kidney transplant.  Around the same time, David ended up losing vision in his right eye due to complications from diabetic retinopathy.

His early days of vision loss were very challenging, given the sudden, extreme change he experienced in depth perception.  Although he can laugh about it now, even the smallest tasks like pouring a glass of water were terribly frustrating at the time.

By 1999, a cataract had started to form on David’s left eye.  Doctors felt it too risky to operate since his only remaining vision was in that eye.

Fast forward to the spring of 2005, when David started considering a return to school to finish his college degree.  After attending a fellowship meeting with his pastor at Boston Baptist College, David found himself walking around campus, praying.  He told God that he would like to finish what he started.  “If you’ll provide the funds, I’ll come,” David prayed.  Stepping out in faith, David started his coursework the next fall. 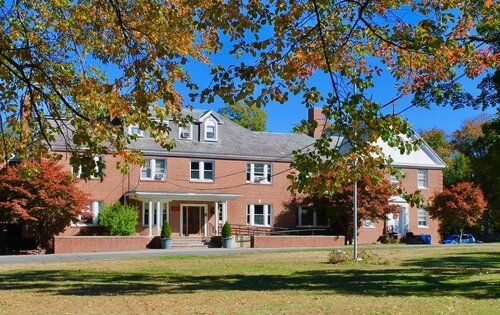 Initially, David figured he would be able to finish his degree in two years.  But as classes began, he quickly realized that it would be necessary to pare down the number of credits he took on each semester.  His cataract made reading extremely difficult, especially at such a high volume.  Since he could not drive, he was also facing a 5-hour roundtrip commute each day via public transportation.  With the mounting challenges of vision loss, David eventually put his classes on hold in the spring of 2008, hoping to return that fall.

Eventually, doctors agreed to perform cataract surgery, which was successful.  David was even able to drive himself to campus in the fall of 2008 — a huge milestone.  He lived on campus that semester.

However, as David continued diligently pursuing his academic goals, life brought about more challenges.  Because of his kidney transplant, David had been placed on immune suppressant medication, and he had to be very careful to limit potential exposure to illness on campus.  To protect his health, he did not live on campus during the spring semester, and only attended one class.

During the course of his studies, David also experienced the loss of his father.  In 2010, he took time off from school to help support his mom through their loss.

And, the burdens of sight loss grew heavier.  As vision in his left eye began deteriorating, David ultimately had to give up his driver’s license, once again relying on trains and buses to get him to and from campus for his final two years of school.

Facing these challenges often required David to shift his focus toward his health and family.  Yet, he remained determined to finish his degree.  Throughout this time, his college professors were extremely supportive, doing all they could to help David reach his goal, especially in the final stretch.  The president of the college even met with him personally, teaching him two of his final courses and providing large print materials to help him prepare for exams.

After 12 years, David did indeed complete his degree, graduating in the spring of 2018 with a bachelor’s in Biblical Studies and a minor in Church Ministry.  Soon after, he was diagnosed legally blind.

Using technology to thrive and help others do the same

David has learned to use technology, including assistive and smart home technology, to address the challenges that come with losing one’s vision.  He has also made it a priority to help others who can benefit from these types of technologies, sharing his expertise and lending a helping hand whenever possible.

David’s main low vision aid is a desktop video magnifier.  While completing his college degree, he used one desktop magnifier at home and a second unit at school (lent to him by a friend’s father).  He recently upgraded his older, black-and-white desktop to the Optelec ClearView+ Speech.  David is enjoying the large, high-definition screen for reading and viewing photos in vivid color.  He also appreciates the text-to-speech component and the spacious, adjustable working area for viewing 3D objects, like product labels. 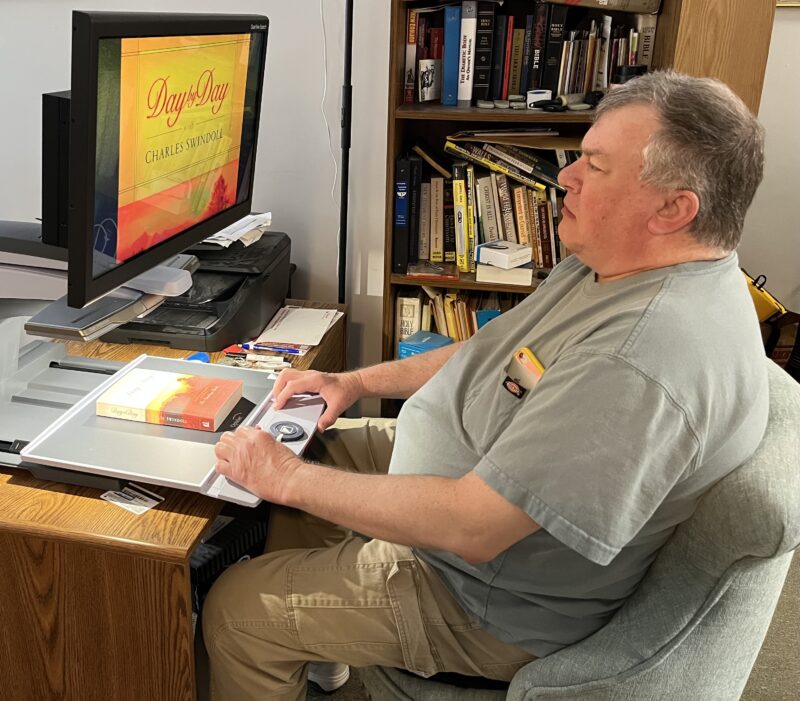 David not only uses the magnifier for reading, but he also uses it to help other residents in his building.  Many of the residents use automatic doors operated by remote controls to enter their apartments.  Years ago, David took it upon himself to source a company that produced these types of controllers at a fraction of the cost than what was currently being offered to the residents.  Still today, he uses his video magnifier to program the remotes for his neighbors and change the batteries when needed.  The magnifier helps him see the tiny pin switches in the remote controls.

Hear David talk about how he uses his ClearView+ Speech in this video.

Beyond his ClearView+ Speech, David has discovered smart home technology, especially smart plugs, as a way of streamlining and simplifying daily tasks.

For those who may be unfamiliar, smart plugs connect to the Wi-Fi network in your home and can be controlled by an app on your smartphone or tablet.  You can plug a wired device like a lamp or fan into the smart plug, and control it from anywhere using the app.  You can also sync up the smart plug with a smart speaker to control your device using voice commands. 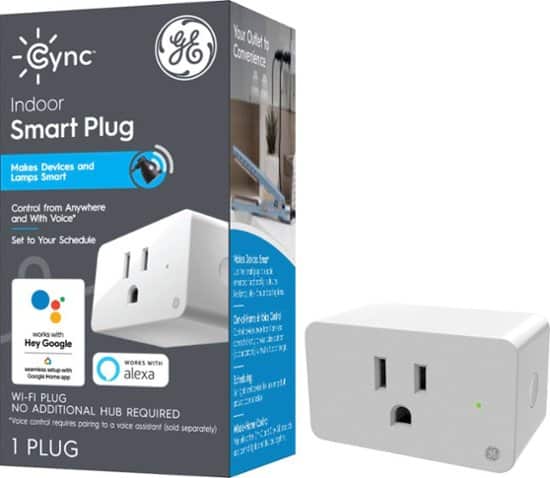 In David’s case, he started out with a few smart plugs and a lamp that he could easily turn off at night when getting into bed.  David’s use of smart plugs has evolved over time.  He now has 10 smart plugs in his apartment, and he has put certain devices in groups that respond to voice commands.  For example, in the evening he can ask Alexa to “turn off the cave,” a specific set of lights he has grouped together.

He has also created smart home routines, like a schedule for lights and devices to turn on automatically in the morning.  When his mom lived nearby, he set her up with a smart speaker, a smart plug, and a portable heater.  With this new set-up, she could control her lamp from across the room — reducing the risk of falls in the middle of the night — and he could manage a routine for the heater remotely from his own home.  He programmed it to turn on in 30-minute increments during the night to keep her pipes from freezing in the winter.

According to David, you can use a smart plug to turn any device on and off as long as it has a hard button.  Besides using smart plugs for lamps, he uses them to operate his air conditioner and a wireless charging plate for his smart phone.  Based on his experience, David says you can start small and build up your smart home as you go.  (For those interested in learning more about how to set up a smart home, check out this free guide from TechHive.)

On the topic of smart phones, David has also optimized his iPhone using its built-in accessibility settings.  He taught his phone to recognize his voice, so that Siri responds to commands immediately.  Rather than pressing the home button to access Siri, he can ask her a question when his phone is out of reach.  Within the phone’s settings he can also increase the text size and use the “smart invert” feature for a higher contrast, dark background with light text.

Additionally, as a Type 1 diabetic, David relies on a continuous glucose monitoring (CGM) application on his phone to check his glucose level.  With his phone’s accessibility features activated, he can check his levels without needing to carry around a separate CGM device.

Working with the MCB

After being diagnosed legally blind, David registered with the Massachusetts Commission for the Blind (MCB).  Recently, David was recommended to serve on MCB’s Regional Advisory Council.  He is now chairman of one of six boards made up of blind consumers in the region.  These boards help provide input and advice to MCB and spread awareness of its services.

Part of David’s role is to get the word out about all of the programs, services, and resources (including assistive technology) available to blind individuals through MCB.  He helps organize an open house for consumers, where they can attend virtual town halls on topics such as technology and orientation and mobility.  He is doing all he can to share vital information and encourage people to register.

David notes that with a recent switch to digital registration, it is now much easier to sign up for services.  If you or someone you know is legally blind and a resident of Massachusetts, please visit the MCB website for more information on eligibility and registration.

David shared these words of wisdom and encouragement for anyone facing vision loss.

“[If you] find yourself in a place that is uncomfortable and unfamiliar, especially when it comes to vision loss, there is always hope.  Hope [means] you seek out those who can help you.  From my point-of-view, God is number one.  You have to lean on him.  When storms come our way, [this] may be the reason: we learn to lean on him.”

In terms of finding support, David urges people to reach out to relevant businesses and organizations and to consider joining a support group.  There are many people willing to help.  “Never give up” and “take the next step,” says David. 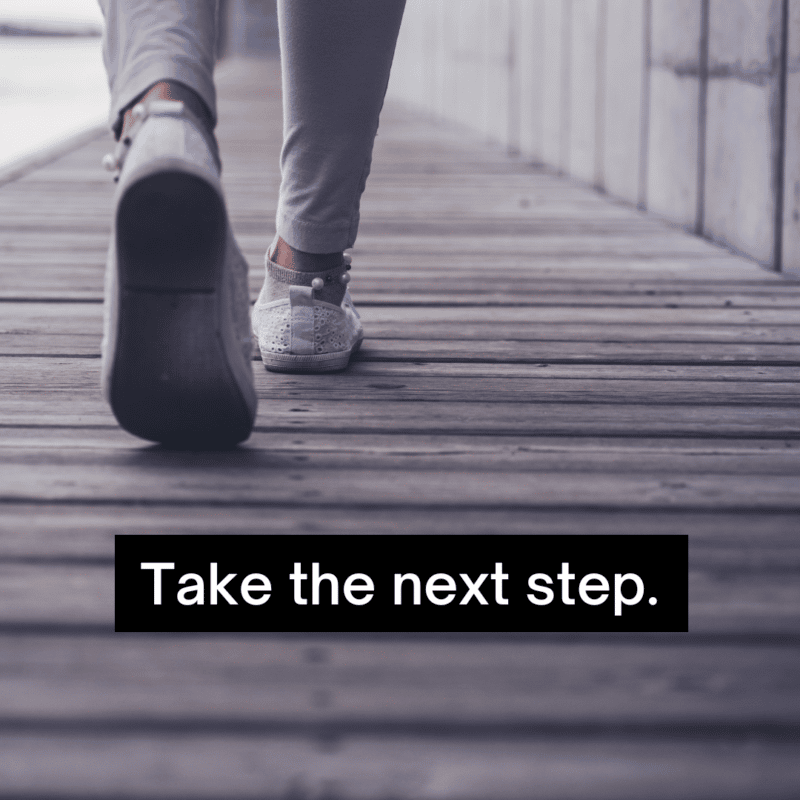 These are words to live by, highlighted and exemplified by David’s story.  We would like to thank him for so generously sharing.  It is evident that he takes every opportunity to help others, coming alongside them with tools and resources and offering encouragement through his own lived experience.  We hope it encourages you today.

A lighting industry specialist, Stu Flom worked at Dolan-Jenner, a leader in fiberoptic lighting, for 15 years before launching his own company in 1994. As product manager, Stu helped find lighting solutions for clients in such diverse areas as photography, microscopy, robotics and automotive manufacturing. He was also involved in supplying the fiberoptics illuminating the Hope Diamond exhibit at the Smithsonian National Museum of Natural History in Washington, D.C. A member of the International Society for Optics & Photonics (SPIE), Stu was awarded a Certificate of Appreciation by the Society of Manufacturing Engineers and is the author of several publications, including Integrating Optical Fibers in Machine Vision (Proceedings), Designing Fiber Optic Lighting for Machine Vision (Society of Manufacturing Engineers), and Light Up with Fiber Optics (Vision). Prior to his work in lighting, Stu was a special education teacher. Stu’s expertise in lighting and background in education form the backbone of his company. As AdaptiVision’s founder and president, Stu is dedicated to applying advanced lighting technology to assist people struggling with low vision, teaching them how to use technology to achieve greater independence.

Asurion, LLC. (2022, March 22). Smart plugs: what they do and how to best use them in your home. Asurion. Retrieved August 17, 2022, from https://www.asurion.com/connect/tech-tips/smart-plugs-what-they-do-and-how-to-best-use-them-in-your-home/